Mana – In Hawaiian & Tahitian culture, Mana is a form of spiritual energy and also a healing power which can exist in places, objects and persons. It is the Hawaiian belief that there is a chance to gain mana and lose mana in everything that a person does.

It is also the Hawaiian/Tahitian belief that mana is an external as well as an internal force that can be cultivated as one cultivates a plant.

Certain sites in the Hawaiian Islands and the archipelagoes of Tahiti are believed to possess strong mana — one of these powerful places is the garden island of Kaua’i.

If you are on a different part of the planet reading this — no worries (as we say here in Hawai’i) just close your eyes and imagine yourself in the center of the most remote island in the world, a wonderful place where rich volcanic soil, heavy rain and tropical sun nurtures every living thing to grow so Nui (Big) you might have thought you were in the Jurassic era, a Jules Verne novel or a major Hollywood motion picture based on one of the above.

To make it into this exclusive club of flora, you must have something extra in your gene pool, a biological boost that supercharges growth and makes you potent and vibrant, a little something wild and perhaps even…Electric.

Every place you could possibly encounter on your visit to the stunning picturesque Garden island of Kaua’i seems like a dream, a hallucination or a scene from a big budget Hollywood blockbuster (perhaps because Hollywood films so many movies here in Hawai’i); but this is different, something seems solid, palpable, powerful and ancient here. You can feel the heavy Mana (spiritual energy) up Mt. Wai’ale’ale on Powerline trail, the rainiest location on the planet Earth.

The breathtaking 13 mile hike along Powerline trail is challenging yet rewarding, as every step opens up to yet another mindbogglingly epic postcard moment that is the essence of this most lovely crown jewel of the Hawaiian island chain; Makuahine Kaua’i (Mother Kaua’i).

Any Huaka’i (journey) up Powerline Trail is a true treat indeed, nothing short of spectacular. Powerline Trail begins as a dense jungle detour up a dirt road utilized to access the electric transmission lines for maintenance, the rugged trail follows the east most edge of Halele’a Forest Reserve, ending near the Keāhua Arboretum in the upper Wailuā, where you can chill out in a fresh mauka (mountain) spring with a rope swing to display your acrobatic (or LACK-robatic) skill doing tricks and hopping cliffs with the locals. 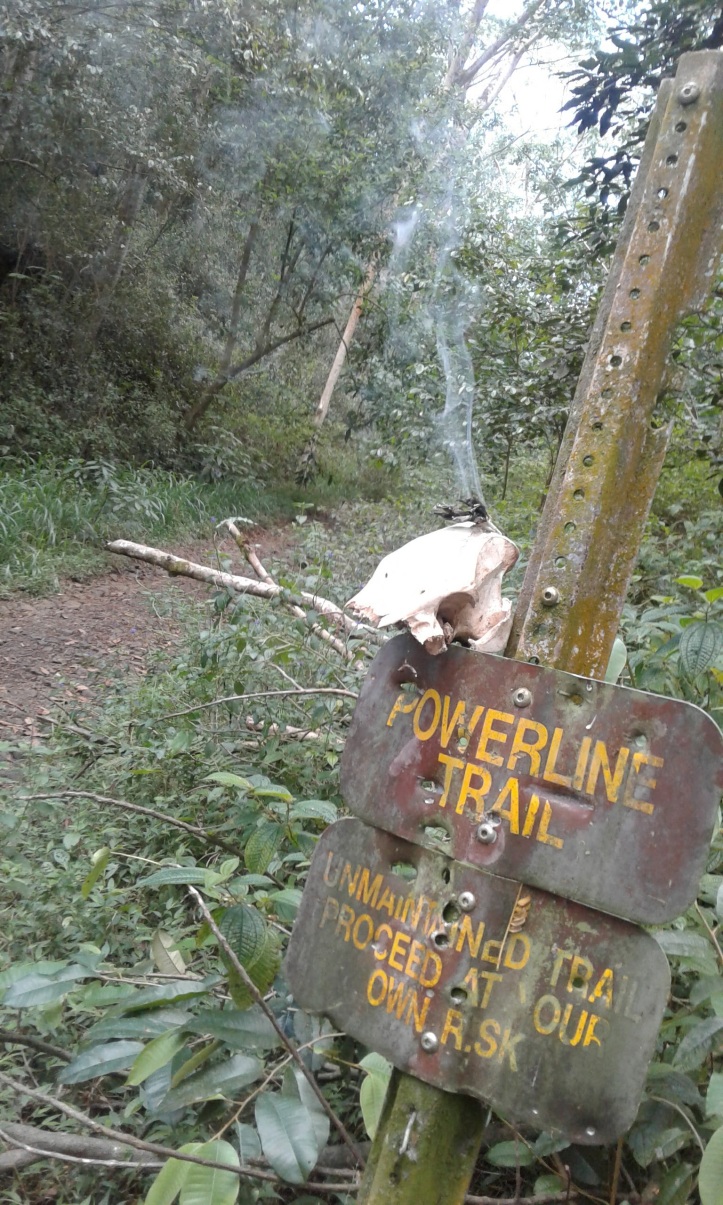 You are in now deep in the realm of Wai`ale`ale crater, this most sacred place, a 9 million year old volcanic crater at the center of a gorgeous island isolated in the Pacific Ocean, Wai`ale`ale stands alone in her mysterious majesty. Two thousand foot cliffs on three sides create a vortex that draws in clouds and moisture making Wai`ale`ale the wettest place on earth, over 500 inches of rain per year, and a incredibly healing scenic Huaka’i (journey).

If you ever have a chance to hike on the stunning and spiritual garden island of Kaua’i — do it!

In the center of the island is Wai’ale’ale — the wettest spot on Earth, blessed with dozens of thousand foot waterfalls cascading down the ancient fern walls on three sides bathing you in a moist magical cloud of negative ions and heavy Mana.

There is heavy Mana emanating from the molten volcanic fires of Kaua’i Electric’s Pua (Flower). The uplifting energetic effects of Kaua’i Electric have powered many a trail runner attempting to conquer the Powerline trail when all else would have failed. Some say Hawaiian Pakalōlō is a performance enhancing drug as she eases pain and energizes the spirit with Aloha.

Yet here you are, high up on the Powerline Trail, home of the legendary Kaua’i Electric a strain you may have caught a whiff of on the wispy winds on time, wondering:

Where’s all dakine Kaua’i Electric we have heard so much about?

Suddenly you hear commotion in the thick lush tropical bush, could it be a rouge velociraptor who was not harmed during the filming of Jurassic Park who cleverly escaped captivity, hungrily hunting you in the darkest regions of your imagination?

Out of the bush sounding like a screeching beast from the prehistoric era rushes a Pua’a (Hawaiian word for pig).

You jump to the side to avoid this massive meaty meal being tracked by Hawaiian hunters trailing a very excited pack of ‘Īlio (Hawaiian word for dogs).

Just then the bushes part exposing a rare glimpse of one of the 7 Hawaiian Pakalōlō wonders of the world:

This is most assuredly a “look but don’t touch moment” as the Hawaiian hunters guided by packs of ‘Īlio (dogs) and armed with weapons may just be the growers you are offending by taking the frosty forbidden fruit of the Powerline Trail, though many a brave adventurers have narrowly escaped with their lives after taking a branch of Kaua’i Electric, a few even recovered precious ‘Ano ‘Ano (seeds) and lived to tell the tale.

There is not one specific breeder responsible for creating Kaua’i Electric, (sorry fame hunters and glory hogs) though many have grown, known and loved her — Mother Nature and the beautiful island of Kaua’i is responsible for the creation of the legendary landrace Hawaiian sativa strain Kaua’i Electric. Powerline Trail is old breeding, growing and stomping ground of our Kānaka Maoli ‘Ohana (Native Hawaiian Family) on Kaua’i.

It takes many many years of acclimatization for a Pakalōlō strain to be able to sustain the downpours up Wai’ale’ale, not to mention if you get caught growing one haole (alien) strain up there by locals you will seriously regret your insensitive trespass on our sacred Pakalōlō breeding grounds to say the very least.

Hawaiian ‘Ohana (Families) up Wai’ale’ale have been breeding and preserving Kaua’i Electric for Hanauna (generations) long before the names Kaua’i Electric or Powerline Trail even existed!

“One of the main reasons we still get Kaua’i Electric and she never go extinct like so many other Hawaiian landrace strains is because the majority of new haole (alien) growers who came to Kaua’i were afraid to venture into the bush up Powerline where we hunt Pua’a (Pigs) and plant our Pakalōlō (Cannabis). We lost many other strains we had around for years down Hā’ena due to cross pollination with new invasive haole (alien) strains — no worries we still get Kaua’i Electric.“ ~ Kupuna (Wise Elder) from Hā’ena up North Shore Kaua’i.

Mahalo (Thanks) to local growers who kept it true to Hawaiian genetics, Pakalōlō preservationists around the globe and our underground cultivation communities deep love for this special strain — we still have Kaua’i Electric!

While her famous Hawaiian sativa cousin Maui Wowie is often described as: Psychedelic — a euphoric joyride of limitless potential within the infinite now with Maui Wowie immersing the user in a full blown experience of Universal mind expansion, tripping gone fishing with stars out surfing somewhere in the cosmos — Kauai Electric creates a loving connection with our Mother deep beneath the surface of the Earth. Kaua’i Electric is most frequently described as a frosty crystal coated hearty heirloom Hawaiian landrace sativa strain with a very special attribute:

Kaua’i Electric is Pakalōlō of the ʻĀina (Hawaiian word for land meaning “that which feeds us“). When you medicate with Kaua`i Electric, your soul connects with the Mana (Spiritual power) of Kaua’i on a next level Hawaiian high highlighted by tremendous tropical terpenes and a long lasting serene souring sativa feeling.

Kaua’i Electric is a Pua (Flower) of the sacred ʻĀina, cared for by countless Hanauna (Generations) on a island where the very atmosphere is alive and electrified…

This is a text widget, which allows you to add text or HTML to your sidebar. You can use them to display text, links, images, HTML, or a combination of these. Edit them in the Widget section of the Customizer.